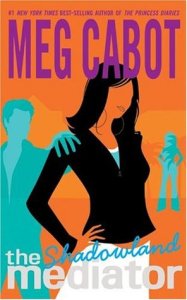 Suze is a mediator — a liaison between the living and the dead. In other words, she sees dead people. And they won’t leave her alone until she helps them resolve their unfinished business with the living. But Jesse, the hot ghost haunting her bedroom, doesn’t seem to need her help. Which is a relief, because Suze has just moved to sunny California and plans to start fresh, with trips to the mall instead of the cemetery, and surfing instead of spectral visitations.But the very first day at her new school, Suze realizes it’s not that easy. There’s a ghost with revenge on her mind … and Suze happens to be in the way.

Meg Cabot is one of my favorite author back in my childhood. I’ve read many of her stand-alone books (How to be Popular, Teen Idol, All American Girls, etc.) and planning to read her Princess Diaries series (though since I can’t find the complete series in the library and bookstore, I have yet to read it until now). But I’m never interested to read her Mediator series for one tiny, somewhat silly reason : the fact that it’s about ghost.

If you know me, I’m truly afraid with anything related to ghost and horror movie/book, even until now (not as worse as when I was a child though). That’s why, I don’t want to read The Mediator series, even deep down I know that it’s not a horror books. Until now, when I went to my cousin’s house and saw that she has the complete Mediator series, I decide to borrow and marathon it. I’m so glad I did it because it turns out to be fun and I really miss Meg Cabot’s writing.

The Mediator’s main character is 16 year old Suze, who is a mediator. A mediator is someone who can talk to ghosts, and Suze made it her job to ‘help’ the ghosts move on to their next life. When her mother remarried and Suze is forced to move to North California, she is (not really) shocked to see that a ghost has already occupied her new bedroom. Specifically, a 150 years old ghost name Jesse. Now, personally, I really love Suze! She’s sassy and cynical and a bit childish and basically like the typical teenager, so it’s really easy to relate to her. Suze actually reminds me of Percy Jackson, and that’s why I laugh a lot when I read this series like when I read the Percy Jackson series (or maybe it’s because Meg’s writing is similar to Rick’s). As for Jesse, well

Jesse is a bit funny (you know, since he was born in 1800s, he often didn’t get the references Suze makes), really overprotective, and basically a gentlemen. I really enjoy Jesse and Suze’s interactions and often look forward to it (especially from book 4 – 7). Short to say, Jesse definitely made it to my book boyfriend list. There’s another character that only appear from book 4 until 7 that I want to talk about–Paul Slater. He’s manipulative and cunning and claim that he and Suze is destined to be together because they both are mediators, and some people considered him as the villain. But personally, I think he’s just need friends, and while some of his actions are really bad, I still couldn’t hate him.

The plot itself is simple, and yet full of actions since most of the ghosts didn’t want to move on to their next life before ‘finishing some things’ (usually involving revenge to someone still alive). As for the romance, it’s full of swoon (especially in the last 4 books) and ever since the first book I know that Suze and Jesse will find something to work their relationship out.

One last thing that I want to talk is the family-relationship in this series. Suze dad died when she was 6, and ten years later her mom remarried to Andy Ackerman, who has 3 sons. YA book nowadays rarely include family, and if there’s one, usually it’s broken family. But thankfully, not this one. While Suze sometimes still refers Andy and his 3 sons as ‘step-‘ and complain whenever someone say ‘it’s your dad/brother without the word step’ (I hope you get what I mean), I think Suze really loves them. She even has a close relationship with Andy’s youngest son, David, who know about her secrets. Also, Andy has a strict rule about showing up on family dinners, which is something we rarely see in YA.

Overall, I love The Mediator series, and if you love Meg Cabot, then you should give this one a try!

Published by Tiffany @ String of Pages

Tiffany is a college student by day, and not-so-professional fangirl by night. Besides obsessing over books and fictional characters, she also loves to watch k-dramas and taking a nap. View all posts by Tiffany @ String of Pages

One thought on “Series Review : The Mediator by Meg Cabot”

This site uses Akismet to reduce spam. Learn how your comment data is processed.

tiffany is a 20-something years old who loves to fangirl at everything from books to cats. more info about her can be found here.